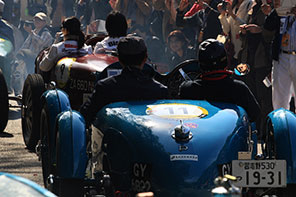 Kanto Plain, October 21: Japan's premiere historic rally, La Festa Mille Miglia has a more familiar ring to it in this, its seventeenth year, as the original event moniker is once again adopted after two years under the La Festa Autunno banner.

Setting off from Meiji Shrine in the centre of the capital, the entry list boasted 94 important (and valuable) machines across five classes, from 1923 to 1968. Heading the troupe was a brace of half a dozen Bugatti, traditionally the vanguard of the rally, with names like Bentley, Aston Martin, Riley, BNC, Alfa Romeo, Rally, MG, Fiat and Lagonda rounding out just the inter-war roster.

As with any event of this stature, La Festa features some of the most breathtaking scenery Japan has to offer. That, coupled with the winding open roads, the quaint villages and towns through which the cars

pass, and the five-star accommodation after each day's driving, make it an unmissable event for any die-hard enthusiast.

With their first overnight stop in the resort town of Karuizawa, the entrants were well placed for some serious mountain pass stages on day two, and close to 400kms on the itinerary.

With over 1,100 kilometres of competitive stages in total, it's a test not only for the cars, but also their occupants.

Weather too, plays a critical role in any event of this length, run over four days. There are always sunny periods, but this time of year promises unstable conditions too - and that means rain. This latest running saw competitors utterly drenched throughout the third day, not too pleasant for the open-top contingent - which made up close to half the entry list. Sunny climes returned for the final leg however, and it was a joyous sight to behold as the automotive masterpieces rolled back into Tokyo on the Monday night - to the cheers of crowds that lined the streets.

This email address is being protected from spambots. You need JavaScript enabled to view it.