Fuji Speedway, September 7: At their home circuit, the Lexus teams were always expected to perform well (not least because the marque locked out the top four positions in the 500km race here in May), and for their fans, they didn't disappoint. Leading the charge, the ZENT CERUMO SC430 beat the identical KeePer TOM'S machine by nearly three tenths, with the winners of the last round, the Weider Modulo HSV, taking third.

In fact it was a pair of Honda HSV-010 GTs occupying the second row of the grid, the RAYBRIG machine lining up fourth for tomorrow's 300km race. Demonstrating their home course advantage, starting fifth and sixth is another pair of Lexus entries, as the quickest of the Nissans could manage only seventh, despite having been quickest in the morning's free practice session. 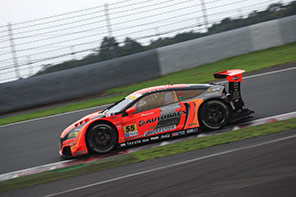 GT300 produced another nail-biter as the #55 ARTA CR-Z GT, winners of Round 4 at SUGO, grabbed the top spot with literally a handful of seconds remaining in the session. Perhaps even more noteworthy was the src="/images/news_articles/honda_crz_gt_gt300.JPG" alt="" align="left" /> recovery by the NDDP squad, firmly taking second on the grid in their Nissan GT-R Nismo GT3 despite the engine letting go fairly spectacularly in the morning's two-hour session. The car won't have it easy however as the other Honda CR-Z GT is third, and Suzuka winners R&D SPORT and their SUBARU BRZ line up fourth.

Tomorrow's race promises to be a relentless sprint throughout its 300-km distance, helped in no small part by Fuji Speedway's 1.5km main straight, which should see the first finishers cross the line approximately 110 minutes after the lights go green.

This email address is being protected from spambots. You need JavaScript enabled to view it.